On my first visit to the [amazon_textlink asin=’1493001493′ text=’Outer Banks of North Carolina’ template=’ProductLink’ store=’theyums-20′ marketplace=’US’ link_id=’60d33449-92a6-11e7-9816-f1dfe22f6af7′], I was shocked that the area had so many locally owned restaurants. After trying several of them over the course of four days, I discovered that the food in the Outer Banks is stellar. Think the freshest of seafood, tastiest of desserts, and everything in between.

One stand out, Owen’s Restaurant, has been serving the residents and visitors of Nags Head since 1946. Had I not have been invited to this eatery, I most likely would have driven right by the shaker-sided establishment that looked like a sprawling house. It did not have fancy neon lighting or a contemporary look beckoning people to come in. What it did have though, was a fantastic menu with top quality dishes served by friendly and impressive servers who were great at their job. I was in love with the ambiance and food within minutes.

Menu: I visited Owen’s Restaurant with a small group of travel writers. We ate almost everything listed on the menu; some things we ordered and others were brought for us to sample. We began with a huge variety of Owen’s Restaurant appetizers including Coconut Shrimp (perfectly fried and not one bit greasy), Escargot (some of the best I have ever had), Sea Scallops Rumaki (why can’t everything be wrapped in Applewood bacon?), Crabmeat Remick, Crab Stack, and Fish Bites. This was in addition to the complimentary cheese crock with a variety of crackers that was already on the table. I swooned over the fish bites (the dipping sauce was commendable!) made from one of the day’s fresh catches, Crabmeat Remick (rich and decadent but not a typical crab dip) and the Crab Stack, which had layers of mango, tomato, and avocado with a key lime vinaigrette. It was sublime and my favorite!

We followed that course with the highly recommended, velvety-looking Lobster Bisque, laced with [amazon_textlink asin=’B004JLBVMC’ text=’sherry’ template=’ProductLink’ store=’theyums-20′ marketplace=’US’ link_id=’db9068c5-92a6-11e7-af85-39d0e96d757f’] and riddled with hunks of Maine lobster. There was total silence once we tried the soup, as everyone was consumed by the pleasurable taste of it. For the third course, we indulged in classic Wedge Salads: a huge slice of iceberg lettuce with tomato, bacon pieces, blue cheese crumbles, and dressing that was out-of-this-world.

Owen’s Restaurant’s menu has so many coastal Southern and seafood favorites that it is hard to narrow down to only one entrée. What we ended up with were the Catch of the Day (prepared in your favorite style), Soft Shell Crab (this is a do-not-miss seasonal item that will rock your world!), Mixed Grill, Yellowfin Tuna (grilled in ginger soy, served with almond wild rice), and Shrimp and Mascarpone Grits (shrimp and sausage, sauteed with onions, peppers, garlic, and herbs), which received the highest of praises. Most dishes came with rice or a potato dish,[amazon_textlink asin=’B00OAWVYKE’ text=’ hush puppies’ template=’ProductLink’ store=’theyums-20′ marketplace=’US’ link_id=’05013c3a-92a7-11e7-b759-bbc11d13ff63′] (could this evening get any better?) and mixed baby greens or seasonal vegetables. Freshly baked bread followed. Other noteworthy menu items included a wide array of pasta dishes, prime beef, lobster, and crab. The Mixed Grill (petite filet mignon, teriyaki marinated tuna, and a brochette of shrimp, scallops, and vegetables) is one of their best-sellers.

Though we were all still sighing and making guttural noises of happiness, we could not pass up Owen’s delectable desserts. I recommend the Creme Brulée (the quintessential Southern offering), Key Lime Pie (the crust was light and flaky, topped with tasty key lime filling), Fourteen Layer Chocolate Cake, and Chocolate Mousse (I could eat this all day!). I am a Southern gal and Owen’s Restaurant’s pain-staking uber thin fourteen layered Chocolate Cake delighted me. It was wonderful, so light and moist, with a perfect balance of chocolate icing and cake ratio! Have you ever eaten a fourteen layer cake?? Shout out to the creator of this recipe! It is no wonder that Owen’s Restaurant was the best meal of my Outer Banks trip.

Price Range: Prices are listed on the website as $$$, but no dollar amounts are given. I found all of the items at Owen’s Restaurant to be fairly priced, but some may be based on supply and demand since the Outer Banks is a vacation destination. As guideline, appetizers were between $7 to $12, entrees $12 to $36+, and desserts $5 to $8.

Thoughts: Owen’s Restaurant proved to be the best meal that I had in the Outer Banks and I think my colleagues would agree. I loved the restaurant’s homey feel and their display of decorative china and oyster plates throughout the enormous property. The gift shop was stocked full of beachy-themed items, home-decor, and collectibles, many I would have loved for my house. We enjoyed browsing the items while we were waiting on our table.

Huge, yet comfy wooden arm chairs donned the dinner tables and cut glass windows added a level of sophistication to the restaurant’s decor. Dark floral fabrics hung from the windows and white tablecloths, topped with a fresh flower bouquet, took the level of the restaurant to fancy, while the atmosphere remained casual. There were many separate rooms throughout the restaurant, which gave a slight heir or intimacy. The servers at Owen’s Restaurant were top-notch and highly professional. We didn’t want for one single thing while we were there; our waiter had the uncanny ability to predict everything we were going to need and bring it before we asked. Our evening at Owen’s Restaurant was one to remember.

You’ll want to head for the Outer Banks to stay, so check out these hotel reviews and start making plans.

Disclosure: I was hosted for my meal as part of a press trip.  This post contains affiliate links. Clicking through for additional information or to make a purchase may result in a small commission being paid, at no additional expense to you. By doing so, you help support this site and its authors, and we thank you. 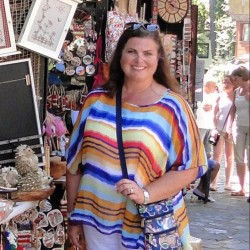 Melody Pittman
Melody is half of the Wherever I May Roam Blog travel writing team, along with her daughter, Taylor. She is the Southern TravelingMom and a member of NATJA and TBIN, a vetted group of influential travel writers and social media enthusiasts. She writes for Charleston Home and Living Magazine, Best of Life Magazine, Travel Guide to Florida, and various other sites and publications. Her blog has been in the Rise Leaderboard’s Top 1000 Blogs and Top 100 Twitter Sites for over a year..

Melody resides in both Vero Beach, Florida, and Boquete, Panama with Eddie, her husband of 25 years. They are parents to 2 wonderful daughters, a fantastic son-in-law, sweet pound cat Harlow, and love of their lives dog, Priscilla. When she isn’t blogging or taking press trips, Melody loves cruising, Broadway, Disney, UNESCO World Heritage Sites, and cooking for her friends. Her immediate goal is to visit all 50 states (12 more to go!) and as many countries as she is years old (1 more to go!) She recently owned and operated a successful catering business and several restaurants. Favorite foods: Eggs Benedict, curries, Shrimp in any way, shape, or form, and Cheese Fondue