Chicken and dumplings with fluffy pillows of giant dumplings crown a tureen of tender, savory poultry. If you want a meal like Grandma made in the 1940s, Tad’s Chicken ‘n Dumplins is an ideal stop on your trip to the Columbia River Gorge.

Menu: Tad’s appetizers include a selection of fried mushrooms, zucchini, onion rings, and even chicken livers. An impressive house-smoked salmon platter is designed to serve two people and includes cheese, fruit, and a dark roll.

The Original Chicken ‘n Dumplins is made with tender stewed chicken and home-style chicken gravy made from scratch. In addition to this traditional meal, chicken livers in mushroom gravy and three other chicken dishes round out the Chicken Menu.

From Tad’s legacy as a fish-house, salmon, halibut, scallops, prawns, oysters, lobster, and razor clams from the Alaskan Kenai Peninsula on Fridays appear under the Seafood Menu.

The chicken and seafood dinners include a relish tray; soup or salad; bread; home-style green beans; and your choice of rice, potato, or dumpling.

Old-fashioned Liver & Onions and Chicken Fried Steak are on the Beef Menu along with New York Steak, Top Sirloin, and Prime Rib on Saturdays. The locally raised beef from the Pacific Northwest dishes are accompanied by Blue Cheese Sauce, Grilled Onions, Caramelized Onions, or Sautéed Mushrooms.

With a nod to Pasta, the Pesto Fettuccini or Fettuccini Alfredo is served with the relish tray, bread, and salad.

The Kid’s Menu embraces all the childhood favorites like Chicken Strips, Chicken n’ Dumplins, Fish & Chips, Mac & Cheese, and Fettuccini Alfredo along with a fruit and cheese plate.

For alcohol drinkers, there is beer by the bottle and on tap as well as house wines sold by the carafe or glass. More refined wines by the glass or bottle hail from California, Oregon, Washington, France, and Italy with a Malbec from Argentina thrown in for good measure.

Thoughts:  With a name like Tad’s Chicken n’ Dumplins, you’d think that all they served would be their namesake meal. Don’t be fooled! While they are using 70-year-old recipes, Tad’s menu selection can’t be beaten.

When I found chicken livers and liver & onions on the menu, it brought back memories of my childhood growing up in Michigan. I also haven’t seen, in years, a relish tray with perfectly trimmed carrots, celery, cucumber, broccoli, pepperoncini, and baby corn placed so elegantly on the tray with ice cubes on top to keep them fresh. The green beans are just the way I remember them, too, with little bits of bacon and onions.

The dumplings are so large that one meal could serve two people. Large chunks of white and dark meat chicken are submerged in the rich gravy. An extra bowl of gravy comes with the order, too, so that you don’t run out.

When it was obvious that I would have leftovers and requested a To-Go box, the waitress encouraged me to try the chicken and dumplings for breakfast because they are like regular biscuits and gravy. I did as she suggested, and she was right. So, now we know that this meal will really feed three people!

Tad’s is one of the last roadhouses on the Columbia River Highway. When it was first opened in the late 1920s, they were south of the Sandy River Bridge, Prohibition was in effect, and they mostly served fresh fish and seafood. In the 1940s, they moved to the current location and added Chicken and Dumplings to the menu and added to their legacy.

Warm wood tones fill the restaurant dining room and patio where you can enjoy scenic views of the Sandy River and Troutdale Bridge. The ambiance at Tad’s is comfortable, relaxed, and welcoming to the entire family – young and old alike.

Tad’s doesn’t take reservations, but you can call ahead on the same day and let them know you are coming. 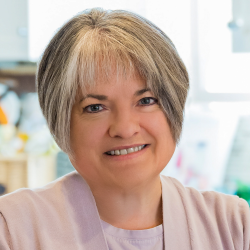 Follow me
Julie Diebolt Price
Photographer and Travel Writer at JDP Photography
Julie Diebolt Price is a regular contributor to TheYums.com. She is a professional photographer, freelance travel writer, and teacher of photography and business. Along with extensive travel in the United States, she has many European, Mexican, and Chinese stamps in her passport. She enjoys planning, researching, creating and sharing experiences.

Julie is a member of TravMedia, PPA and ITWPA and can also be found at www.jdptravels.com.

Follow me
Latest posts by Julie Diebolt Price (see all)

2 thoughts on “Chicken and Dumplings at Tad’s in Troutdale, Oregon”