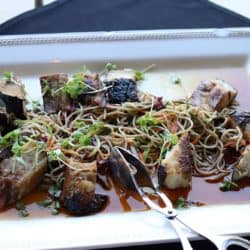 Graft is a small plates restaurant inspired by wine and the bounty of Midwestern ingredients. A friendly, knowledgeable wait staff creates a warm and welcoming environment. If the source of your food is important to you, the staff at Graft will be able to tell you where the food comes from.

Menu: The small plates menu is simple and logically categorized into Veg & Grains, Fish & Shellfish and Meat. There are just a handful of options in each category, allowing the chefs to focus on the fresh ingredients of the day, creating limited but spectacular options for the guests. Offerings change with the seasons and availability of ingredients, which makes it fun to go back and see what is new.

There are a few large plate options for those who can’t get away from a traditional American style of eating and have heartier appetites. During my visit swordfish with sweet potato, haricot vert, pomegranate and brown butter was served. A dry-aged bone-in ribeye with mushrooms, polenta and red wine was also offered. The third option was a safe, but equally delicious half chicken with root vegetables, swiss chard and sherry jus.

One of my favorite things about a small plates restaurant is having room for dessert. Three flavors of mousse (chocolate, raspberry or coconut), three varieties of pot de crème (butterscotch, caramel and pecan tuile) and key lime pie give a wide variety of options for many different palates.

The wine list provides a variety of domestic and imported choices. The craft cocktail menu is clever and creative, with features like State of Celerity. Death Door’s Gin from Middleton, Wisconsin is the foundation. Rare Wine Company’s Charleston sercial madeira from Brisbane, California is added. Then Bitter Truth celery bitters from Germany are used. Rhubarb and lime juice garnish the cocktail. The unique combinations just beg to be tried.

The craft beer selection is mostly Midwestern with a few Wisconsin breweries features. Two Madison breweries appear on the menu with the Ale Asylum Demento, a session pale ale, and selections from Karben4 Fantasy Factory. The J.K. Scumpy Orchard Gate cold cider from Flushing, Michigan is an out of state, but still a midwestern option.

Thoughts: Located across the street from the state capitol, Graft has a sophisticated, yet welcoming vibe. There is definitely a business buzz going on as the problems of the world, or at least of the state of Wisconsin, are being solved over local fare.

This is the perfect place for a special occasion or a business dinner. But, the price point of a small plates menu means stopping in on a week night for a cocktail and a quick nosh is not out of the question or beyond the budget.

What I love about the style of this restaurant is the possibility to return over and over again, knowing it may never be the same twice. It is impossible to get tired of a place like this.

Disclosure: The author was a guest of the Wisconsin Economic Development Corporation (WEDC).