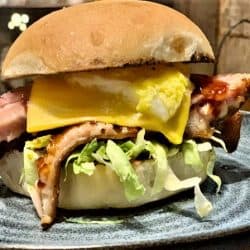 Chef Lyle Broussard’s award-winning skill is showcased in this fabulous restaurant inside L’Auberge Casino Resort in Lake Charles, Louisiana. The flavors and dishes he learned from watching relatives during his childhood have been fine-tuned, and diners at Jack Daniel’s Bar & Grill are eager to devour them.

Menu: The menu at Jack Daniel’s Bar and Grill is a perfect reflection of the region, firmly in the south but also in the bayou where cajun and creole spices reign supreme. With items such as oysters, shrimp, gator bites, gumbo, boudin balls, catfish, redfish and barbecue, you are sure to find a locally-sourced dish to enjoy.

The biggest surprise to me was the unassuming-sounding chopped salad. The cucumbers, tomatoes, onions, peppers, cheeses and bacon artfully piled on crisp Bibb lettuce and drizzled with the creole dressing could easily have been my whole meal. But, I went right ahead and sampled the thick gumbo, the lightly-battered gator bites, the smoked tenderloin, shrimp cocktail and boudin balls. Everything was wonderful.

Burgers and barbecue are heavily featured on the menu, but a tempting number of large plates are also offered. You can get anything from a platter of tacos to a ribeye steak or a fried catfish plate. My favorite side was the creamed corn grits, but the mac and cheese was also exceptional with its cheese sauce containing both pepper jack and cotija cheeses.

Thoughts: The setting is grand with an interesting touch wherever you look. A wire cactus sculpture surrounded by a painted desert scene waits to greet diners at the entrance. A huge painted mesh American flag sits atop the entire bar area, and an outline of the United States made up of license plates adorns another wall. The polished cab of an eighteen-wheeler juts out of a corner, and the tabletops are reminiscent of a game of Chinese checkers. Chef Broussard was heavily involved in the decor and took great care in choosing the serving pieces, which are a textured slate blue that seems to make every dish look amazing. The concrete floors, massive and rustic chandeliers, high ceilings and tasteful use of wood and leather contribute to an elevated American and western theme.

Chef Broussard is very popular in the Lake Charles area. He has a friendly personality and participates in many events to promote the region. He loves talking about watching an aunt, an uncle and his grandmother in the kitchen when he was growing up and seems to truly believe it when he says, “This is Louisiana. Everybody knows how to cook!” He inherently understood what ingredients and spices went together best, but he attended the Culinary Institute of America in New York to learn techniques and broaden what he already knew. He particularly likes using seasoned iron skillets to create his masterpieces.

Lynchburg, Tennessee is the home of the Jack Daniels Distillery, but this restaurant is its largest customer outside of Lynchburg, so that is why they were allowed to use the name. Much planning went into the creation of the atmosphere and the cuisine at Jack Daniel’s Bar and Grill. It’s casual, making it extremely popular when football games are on the numerous flatscreen TVs or for weekend brunch, but it is also one of the top places for dinner in Lake Charles.

Disclosure: I was hosted by VisitLakeCharles.org for this meal, but the opinions are 100% my own, and I am eager to return for an unhosted meal.