Well, they execute simple, [amazon_textlink asin=’1844770095′ text=’traditional Spanish dishes’ template=’ProductLink’ store=’theyums-20′ marketplace=’US’ link_id=’5aa34dc8-45bc-11e8-a62f-ed6bf723c99b’] to utter perfection. Everything on the menu is delicious, and it’s impossible to make a misstep when ordering. The ala carte style menu has a variety of classics, with rotating specials based on the chef’s mood. Quality and consistency is the name of the game, and their three locations play to win.

Location: The original Soho location on Frith closed, but not all websites have updated the address. You can find the new location at 26-27 Dean Street. Or, visit one of its sister spots at 10 Adelaide Street, Covent Garden, or 43 Drury Lane, Covent Garden.

There’s also have a fantastic by-the-glass selection of quality [amazon_textlink asin=’8495203766′ text=’Spanish wines’ template=’ProductLink’ store=’theyums-20′ marketplace=’US’ link_id=’9c921e8b-45bc-11e8-a22a-1122c3250f18′], including an impressive sherry section. The serving staff is knowledgeable about pairings, so treat yourself to a glass. And especially enjoy the varietals not usually found on a restaurant menu.

Note: There are are a few gluten-free options, but vegetarians may find the menu a challenge.

Thoughts: The energy inside Barrafina starts in the kitchen, radiating out to envelop its patrons as each dish gets served. Carefully choreographed chaos is on full display behind the bar, with each staff member manning a specific section. Waitstaff bounce between, weaving in and out to deliver food, refill drinks, and reset places for the next guest. The tight space and numerous players mean there’s a constant chorus of communication going, creating a background thrum of Spanish.

If you arrive at opening, the queue won’t have reached epic proportions just yet. Early arrival means you’ll secure one of the red leather bar stools. These prized seats come with a full kitchen view, allowing you to enjoy the manic preparations up close and personal. And in fact, the busy nature of the kitchen, and barstool style seating make this a fantastic choice for solo diners. The only downside is you’ll likely be full before you can taste more than a handful of the sublime tapas on offer.

The seafood is clearly fresh and of high quality, displayed on ice inside the kitchen in full view of the dining room. The open kitchen means the ability to view the preparations of almost every menu item if you’re at the counter, so pay attention to what is going by. Also, take a moment and absorb the atmosphere. Watch how the staff interacts with one another, and the smiles on their faces. Note the octopus on the stove, its tentacles barely contained by the giant stockpot it’s braising inside. All of these elements add notes of authenticity and enhance the enjoyment of your meals when they arrive.

Powered by GetYourGuide. Become a partner.

The busy nature of the restaurant means you might have trouble getting the staff’s attention more than a few times. Consider ordering food in one or two bursts, and ask the kitchen to pace things for you.

Finally, be warned. Bringing a large group with you is a no-go. The restaurant doesn’t accept reservations, and the maximum party size is four. However, for parties of eight or more, you have the option to rent out one of their private spaces.

Price Range: The menu falls in the mid-range, with appetizers starting at £3, climbing as high as £7 for the croquetas. Hot and cold meat selections, as well as seafood dishes, range between £7 and £19, with some specials climbing higher. Vegetable sides are between £5 and £10, and dessert runs £3 for sorbet, up to £13 for a selection of Spanish cheeses. Wines are incredibly reasonable, with more than ten options offered at £7 or less.

The variety in price points means you have the option to be frugal if you like. But I’d expect the average tab to come in around £40 per person (including appetizers, a couple of meat dishes, a vegetable, dessert and wine). 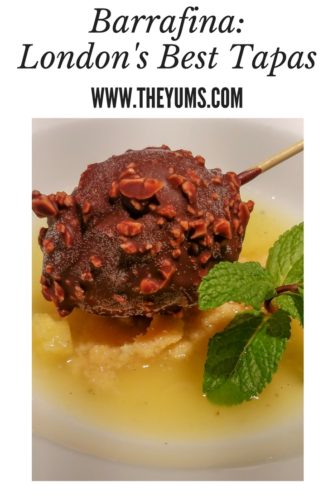