The Esplanade Riel Pedestrian Bridge spans Winnipeg’s Red River, between the Forks historical district and the St. Boniface neighborhood, one of the largest French-speaking communities in Canada outside of Quebec. In the middle of this bridge is Mon Ami Louis Brasserie Restaurant, the only restaurant in North America located on a bridge. The restaurant’s curved windows provide spectacular views of the river. On a summer Saturday afternoon, you might catch a glimpse of a wedding party having their photos taken along the banks of the river, or enjoy watching the boating action.

Menu: The single-sheet menu describes the offerings. The items range from Canadian favorites like poutine and Manitoba vegetable soup to French fares like crusted Brie and savory tarts.

The restaurant’s red-accented black and white color scheme provides a contemporary feeling by the wall art. The floors are wood and as are the unadorned tables. None of those fancy white tablecloths in this French restaurant.

There wasn’t a wait when we arrived; however, it’s a good idea to have reservations as this small restaurant often at capacity.

My favorite dishes are:

Price Range: Exchange rates vary. These prices are in Canadian dollars with the exchange rate of $1.25 CD to $1 US. Appetizers range from $6 for warm marinated olives and roasted spiced mixed nuts or Manitoba vegetable soup to $17 for braised brisket poutine. Tartes flambées run from $14 for a half of a traditional or Mediterranean to $18 for a full garlic shrimp or BBQ chicken. Entrees, burgers, and sandwiches run from $13 for a Croque Croissant to $17 a pound of mussels in white wine cream. Desserts are from $7 for a Belgium Liege waffle to $9 for crème Brulee cheesecake. Lunch for two runs about $50 including tax and gratuity.

For Pinterest: Pin this to your favorite French restaurant board. 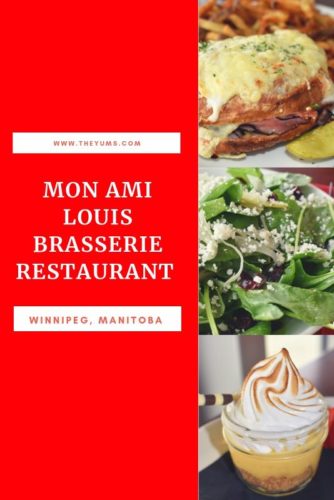